The little boy of Kabul 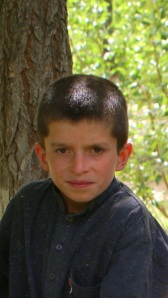 There are a few people whom we meet – even if for just a brief moment, live on in our memories for years to come. This is one of them. A little boy I met one warm afternoon in the summer of 2008 in Kabul, Afghanistan.

I met him at the Babur Gardens. Located on the western slopes of the Sher-e-Darwaza Mountain south of Kabul, this 11-hectare terraced garden was one of our favourite places to go for our weekend family picnics.

It was a quiet Saturday afternoon and the Garden grounds were rather empty save a few young boys playing backgammon under the shade of a hawthorn tree.We spread our carpet and laid out some cushions to recline on (picnics take on a totally different flourish in Afghanistan).

We settled down to a contented reverie taking in the Hindu Kush mountain range in the distance, the mud-brick houses stacked up in rows upon the dusty hillslopes behind us, the occasional laughter and shouts from little children running between the rows of rose bushes. A lazy afternoon under the peerless Afghan sky.

A boy about ten years old, walked by with his little brother who wobbled shyly alongside. My son who was two at that time and the ever sociable, curious little thing that he was, immediately went over to make friends. This older boy stopped and smiled gently at my son. 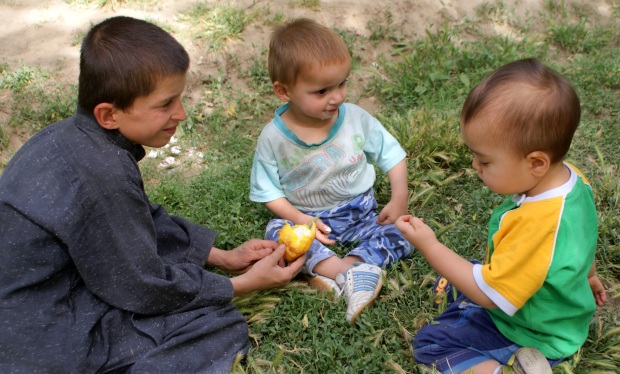 The three of them sat down and even though no words were spoken, there was a comfortable quiet camaraderie natural with children who find no need to fill the gaps with lots of unnecessary chatter.

I offered a cream puff to the older boy who accepted it reverently. I had expected him to break the pastry in half – one for himself and the other portion for his little brother. But he did not. He broke off a tiny morsel and started feeding his young sibling who by now was very clearly, a child with special needs. 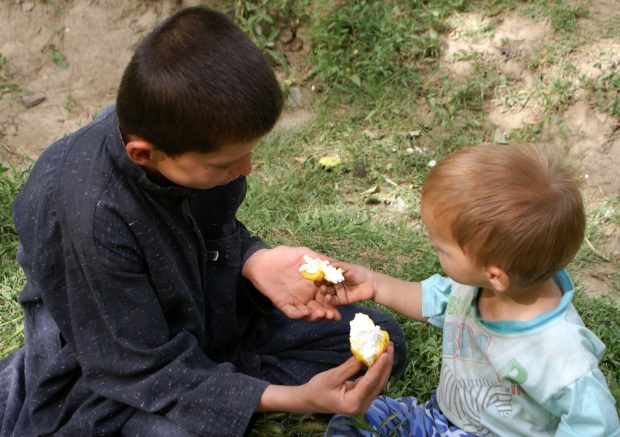 Lovingly and tenderly, this young boy broke off piece after piece and fed his little brother who lapped it all up contentedly. Never once did this older brother even take a tiniest bite of the tempting treat for himself.

Eventhough he didn’t say a word, it was so obvious that this fine young boy took his responsibility as his brother’s keeper readily and wholeheartedly. Other boys his age were running around having a wild game of football. Yet never once did this boy even look as if the thought crossed his mind that his young childhood was being spent looking after his sibling.

It was one of those rare moments in life. I had never seen such gentle, selfless love from a young child before or since then. It was clear, he simply adored his small brother with all his heart.

Even now writing this I am brought back to that afternoon. In another place, in another time. And it still moves me when I think of that beautiful boy. 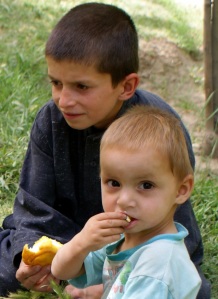 I wish I had known his name. I wish I had been able to meet his mother so that I could have found out her secret of how she managed to teach and instil tender compassion in her son.I wish I had met the father so that I may compliment him on what a fine young son he has and what an honour it was to have met a living example of selflessness, kindness and dedication.

I wish him well, this little boy of Kabul. Afghanistan that rare gem. There’s so much the civilised world could learn from you.

← After the Storm
The Enchanted Wood →

14 thoughts on “The little boy of Kabul”